Following a detailed analysis and applying the restriction of transferability pursuant to article 4 of the articles of association, the Board of Directors of Sika decided to restrict the voting rights of the registered shares held by Schenker-Winkler Holding (SWH) at today's Annual General Meeting to 5% of all registered shares. Such restriction has been made in the company's best interest in order to maintain the status quo, in accordance with the decision of the Cantonal Court of Zug, until all controversial legal issues have been decided in the course of the ordinary proceedings.

More specifically, the voting rights of SWH were restricted for the following agenda items:

For all other agenda items, the voting rights of SWH were not restricted.

At the Annual General Meeting, the shareholders approved the important proposals of the Board and predominantly followed its recommendations. In particular, the following resolutions were adopted:

The annual financial statements and the consolidated financial statements for the business year 2017 were approved. The shareholders voted in favor of a gross dividend of CHF 111.00 per bearer share and of CHF 18.50 per registered share (representing a 15.6% increase compared to the previous year's distribution).

The shareholders re-elected all previous members of the Board of Directors as well as its Chairman Paul Hälg for another one-year term. Jacques Bischoff, the candidate proposed by SWH, was not elected to the Board. Frits van Dijk, Urs Burkard and Daniel Sauter were re-elected to the Nomination and Compensation Committee. Further, the auditors, Ernst & Young AG, were re-elected. Jost Windlin was re-elected as independent proxy.

The shareholders confirmed the appointment of Jörg Riboni as special expert. Further, the request of the shareholder group Cascade Investment L.L.C., Bill & Melinda Gates Foundation Trust, Fidelity Worldwide Investment and Threadneedle Investments regarding the extension of the terms of office of the appointed special experts until the Annual General Meeting 2022 and the increase of the advance payment to CHF 5,000,000 was approved by the Annual General Meeting. In accordance with Swiss corporate law, the majority of capital (and not the votes) was decisive for these agenda items.

The request of SWH for the conduct of a special audit was rejected by the shareholders.

For this agenda item, again, the majority of the capital (and not the votes) was decisive. 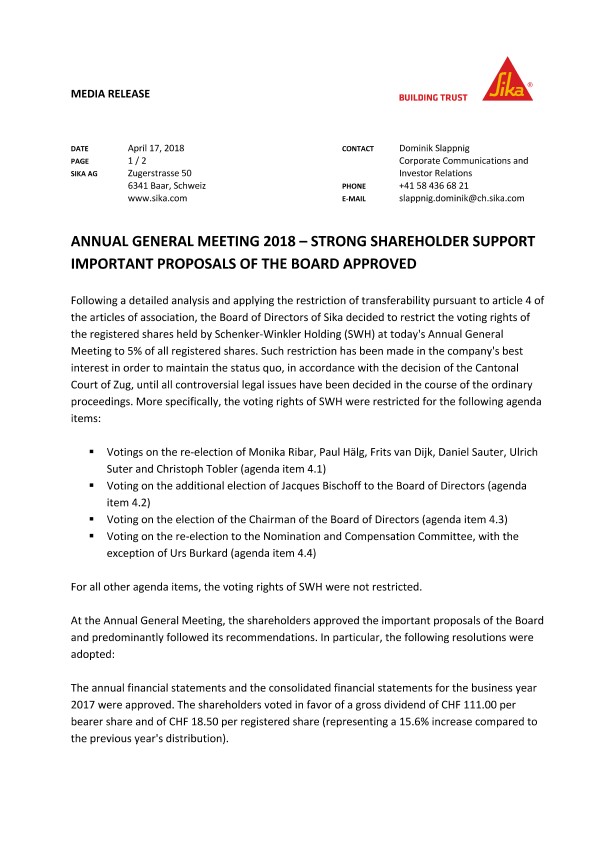 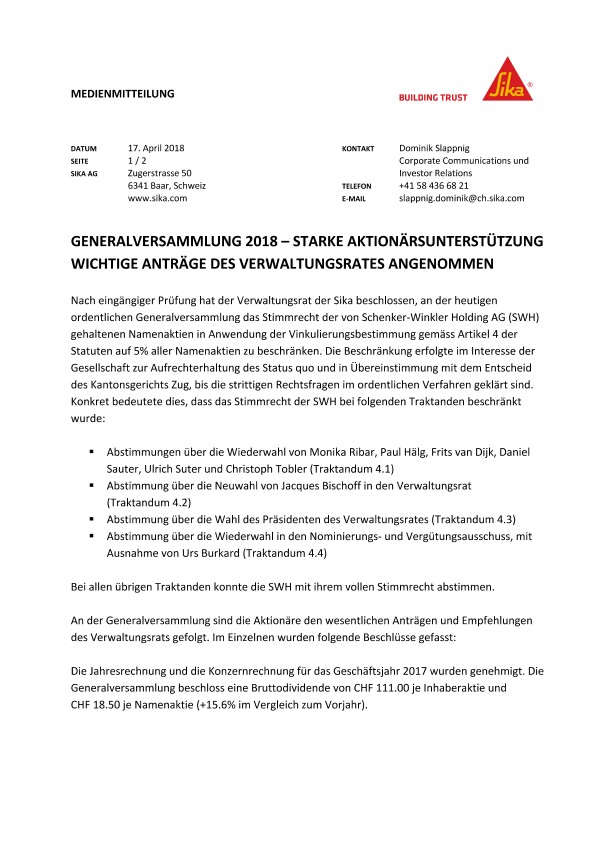