▪ Sales growth of 11.0% in local currencies to CHF 1,554.0 million (+11.9% in CHF)
▪ Growth in all regions
▪ Organization geared to growth and enhanced efficiency with the new Americas and Global Business regions
▪ Opening of a new factory, establishment of another national subsidiary and acquisition of one company
▪ Sales target of CHF 7 billion in 2018

With a dynamic start to the 2018 financial year, Sika maintained its strong growth trajectory, achieving double-digit sales growth in the first quarter and a new sales record of CHF 1,554.0 million. This equates to an increase of 11.0% in local currencies (previous year: 10.7%). A positive currency effect (0.9%) led to robust sales growth in Swiss francs of 11.9%. Sika’s growth was also positively impacted by the consolidation of the seven companies acquired last year (acquisition effect: 6.3%). When compared to 2017, the fact that the Easter holiday period fell early this year had a negative impact on organic growth in the first quarter of 2018.

"The good development of business in the first quarter indicates that we will be able to grow strongly once again in 2018, and to further implement our strategic targets for 2020. We are looking to increase sales by more than 10% for the year as a whole, and thereby break through the CHF 7 billion sales mark for the first time." Paul Schuler, CEO of Sika

Growth in all regions

In the EMEA region (Europe, Middle East, Africa) sales increased by 10.2% (previous year: 12.4%). The major EU countries with the core markets of Spain and the UK also exhibited growth. The Middle East, Eastern Europe and Africa delivered very impressive growth rates. In the beginning of 2018, Sika acquired Index Construction Systems and Products, a leading manufacturer of roofing and waterproofing systems headquartered close to Verona, Italy. By acquiring Index, Sika will extend its product range and significantly strengthen its position in the Italian market.

The newly formed Americas region generated growth of 12.2% (previous year: 14.0%), of which 5.5% was achieved through acquisitions. The harsh North American winter led to the postponement of numerous large projects. Mexico and Argentina continue to exhibit above-average development. The basis for further growth in Central America was laid with the establishment of a new national subsidiary in Honduras.

Growth in the Asia/Pacific region amounted to 3.9% (previous year: 7.1%). The highest growth rates were recorded by India, Australia and New Zealand. China and Japan also contributed to growth in this region. In Vietnam, a state-of-the-art facility for mortar production has come on stream in the Bac Ninh plant alongside the existing production of concrete admixtures. This will enable Sika to continue its dynamic growth in this country’s booming construction market.

The new Global Business segment recorded a growth rate of 20.9% (previous year: 3.3%). Among other things, this includes the globally managed automotive business as well as the two acquisitions Axson Technologies and Faist ChemTec – which are both established providers of components and solutions for the automotive area and also managed globally.

The strong start to the year supports the target for the 2018 financial year – namely an increase in sales of more than 10% to reach CHF 7 billion for the first time. Volatile and rising raw material prices continue to pose a challenge. For the year as a whole, EBIT and net profit should once again increase at a disproportionately high rate. The growth strategy will be continued in 2018 with the opening of eight new factories and the founding of more national subsidiaries. In addition, Sika will seek to fully exploit the business potential offered by acquisitions through enhanced distribution channels, expanded product portfolios and improved prospects for market access.

Net Sales in the first three months of 2018 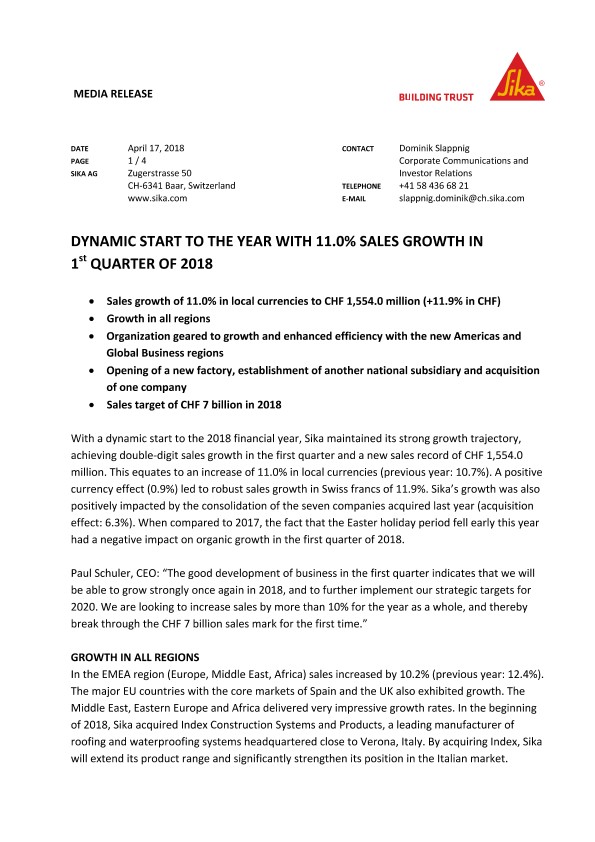 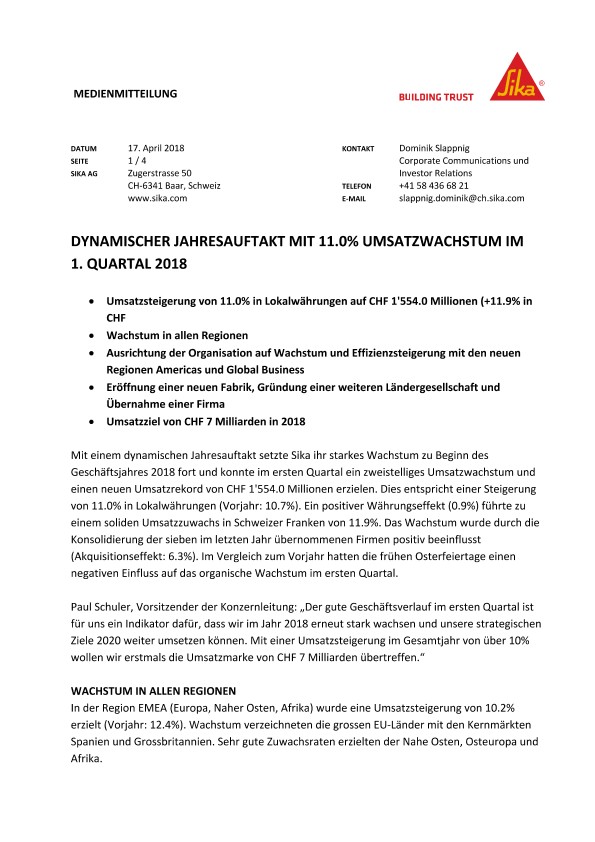