The Sika success story continued in 2017 with another record year. In local currencies, sales increased by 9.0% to CHF 6,248.3 million. Strong growth momentum and disciplined cost management led to new record figures of CHF 896.3 million (+CHF 101.0 million, +12.7%) for operating profit and CHF 649.0 million (+14.5%) for net profit. In the reporting year, 19 key investments were realized with a view to driving future growth. The strategic targets for 2020 were confirmed, and the growth target for 2018 raised to more than 10%.

"In the business year 2017 we continued our growth trajectory and not only reached sales of more than CHF 6 billion for the first time, but also achieved record figures for operating profit and net profit. With nine new factories, three further national subsidiaries, and seven acquisitions, we continued to invest in our international expansion at a high level. My thanks go to our more than 18,400 employees worldwide and the management team. Their loyalty, commitment and great efforts are responsible for us achieving record results once again." Paul Schuler, CEO of Sika

All regions reported higher sales and were able to further increase market share. Particularly high growth rates were achieved in the USA, Mexico, Argentina, China, Southeast Asia, the Pacific area, the Middle East, Eastern Europe, and Africa, as well as in the automotive area. In cumulative terms, sales were up 9.0% in local currencies. The strength of the franc led to conversion effects of ‐0.3%, and thus to an 8.7% increase in sales in Swiss franc terms to CHF 6,248.3 million.

The high growth momentum produced above‐average increases in the operating result and profit. Raw material price increases and volatility posed a challenge, with access to raw materials in China, for example, being limited by environmental constraints introduced by the government. Thanks to persistent cost management, margins were boosted further, while record figures were recorded for both EBIT (CHF 896.3 million, +12.7%) and net profit (CHF 649.0 million, +14.5%).

At 18.4%, it was the North America region that posted the strongest growth (previous year: 7.8%), of which 8.5% was through acquisitions. Sika reported a significant increase in its business volume in the USA, growing much more rapidly than the local construction market in the reporting year. The positive development of the North American business was attributable in particular to the targeted investment in this region over the last few years.

The Latin America region increased sales by 3.3% (previous year: 5.1%). Both Mexico and Argentina generated above-average growth. By contrast, construction activity continued to develop modestly in the countries that are more dependent on the raw material sector, such as Brazil, Peru, and Chile.

Sales in the Asia/Pacific region rose by 5.2% (previous year: 3.6%). High growth rates were recorded in China, while double-digit growth was achieved in Australia, New Zealand, and Thailand.

CONTINUITY IN THE MANAGEMENT

Following the departure of Jan Jenisch, the Board of Directors appointed Paul Schuler as new CEO of the Group with effect from July 1, 2017. Paul Schuler has worked for Sika for some 30 years, and has been a Member of Group Management since 2007. His responsibilities have included the build-up of the industry business as well as management of the North America and EMEA regions.

The Group’s accelerated expansion into growth markets continued under Paul Schuler’s leadership in 2017, with a total of 19 key investments in nine new factories, three additional national subsidiaries, and seven acquisitions.
More than 900 employees working on basic research and the development of new products at 20 regional technology centers are the key drivers of our innovative strength. 74 new patent applications were filed in the 2017 business year, and numerous new products were launched in all target markets.

The foundations for future growth were laid in 2017 with the opening of nine new factories, the establishment of three further national subsidiaries, and the acquisition of seven companies. The strong sales organization, the well‐filled product pipeline, and these 19 key investments give the Group reason to look to the future with optimism.

For the 2018 business year Sika is anticipating an increase in sales of more than 10%. Raw material price increases and volatility remain a challenge in the current year. Operating profit (EBIT) should continue to grow at a disproportionately high rate in 2018. The unknown outcome of Saint‐Gobain's hostile takeover attempt remains an element of uncertainty for the future. 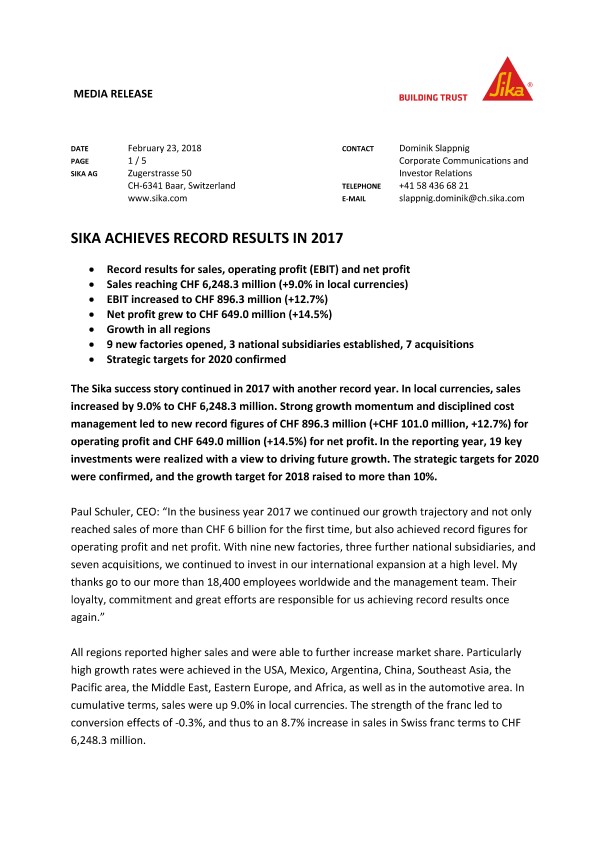 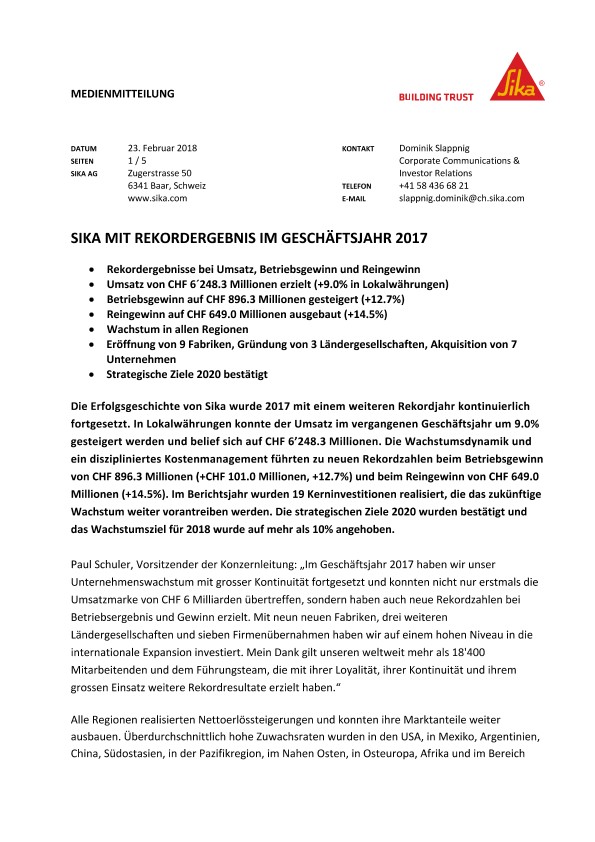 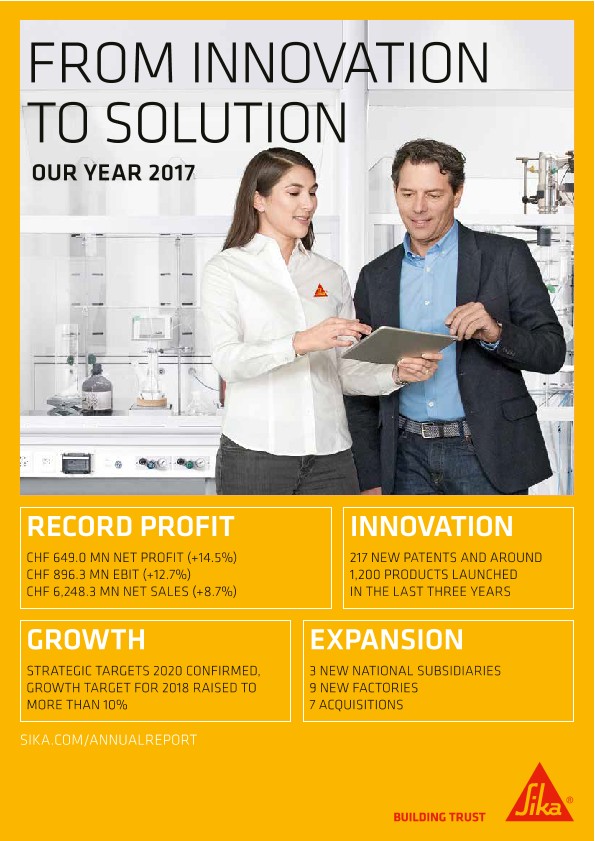